Romania - For Export Only 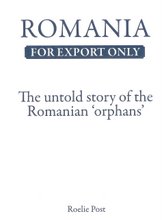 Romania needed to reform its child rights policy, as one of the conditions for its future EU Membership. Large ‘orphanages’ were closed and replaced by modern child protection alternatives.

The author, (Roelie Post) kept a diary on her work for the European Commission that aimed to help Romania reform its child protection.

She soon found out that the intercountry adoption system in place was nothing short of a market for children, riddled by corruption. After international criticism this practice was halted temporarily. When redrafting laws, it became clear that in Romania’s reformed child protection there was neither place nor need for intercountry adoptions.

A ferocious lobby that wants to maintain intercountry adoptions stepped out.

The reader is taken along on an eight-year-travel, and will be shown the story of the Romanian ‘orphans’ from a different light, where global politics and private interests compete with the rights of the child.

Romania - For Export Only (a review)

When in 1999, Roelie Post started working for the European Commission on the "Romanian Orphan" dossier she could not have forseen the consequences of accepting that job.

In 1990, soon after the Ceausescu regime had been overturned, the world could witness ABC's 20/20  documentary on Romanian Orphans. The shocking TV images gave rise to many initiatives to "save the children". Most often started with best intentions, help to Romanian orphans during the 1990's lead to a soaring market of international adoption.

Especially after 1997, when a point system was introduced, the Romanian adoption market was booming. With this system, adoption agencies could earn points by investing in social services. When enough points would be gathered the agencies would be given a child for international adoptions.

Late 1990's the European Union had started the Phare project, which aimed at reforming Romania's child protection system, needed for its accession to the EU. This project focused on closing down large institutions, setting up a foster care system and implementation of family preservation.

Against this background Roelie Post started her work for the European Commission, on changing the European Union's projects for Romanian children, a job she held for eight years. Those eight years she describes in detail in her book: Romania - For Export Only.

From the onset she makes clear how the adoption lobby has one primary interest, delivering as many babies as possible to the adoption industry, all in the name of a child's best interest.

The French business man Francois de Combret sets the stage in the story that reveals itself in the 270 pages of the book. With black and white pictures, showing horribly underfed Romanian Orphans, he bombards media and authorities to raise funds for his organization Sera. The pictures, not representing current Romanian situations, were actually taken years before Romanian child care reform had started.

De Combret has an adoption agenda and Post's book unravels the workings of that agenda. She shows how several projects by NGO's affiliated to or working with adoption agencies are doing little to improve child care facilities in Romania, but mainly focus on keeping status quo, while preparing babies for adoption.

The book takes an interesting turn when in 2001 Romania's moratorium on international adoption starts, leading to 2004's adoption laws. Because many adoption agencies working in Romania had already assigned children to prospective parents, the moratorium led to pressure from several countries on Romania to stop its moratorium.

Roelie Post takes us to conferences, diplomatic meetings and shows how trade negotiations and NATO accession negotiations were used to put pressure on Romania to change adoption regulations. We meet Baroness Nicholson, Special Rapporteur for Romania's accession to the EU, who played a crucial rol in the 2004 Romanian adoption law and the moratorium leading to it. Post sketches a knowledgeable picture of the Baroness and reveals many of the political ins and outs of the political arena this British Member of European Parliament operated in.

She takes us to Romanian institutions too and tells us about the situations she meets, varying from maternities run by American adoption agencies, institutions with Renault "everywhere" and orphanages that don't really care about the babies, because they will be adopted soon anyway.

Towards the end, the book takes a grim turn, when Roelie Post tells us about constant threats made against her. The pressure around her builds up as the Romanian accession reaches its deadline. Candid and well documented she describes how she eventually is forced to leave her job, due to political pressure on the adoption agenda.

Romania - For Export Only is a captivating book. I read it cover to cover over the week-end. It is a very well documented account in diary style of the wheelings and dealings over the access to Romanian orphans. At times it can be a tough read, because she gives many details of the Romanian case. Fortunately the book is much more than cold facts and figures. Roelie Post keeps closely focused on the child's best interest, both in her work and in the story she has to tells us.

re Romania - For Export Only (a review)

I can confirm that the book written by Roelie Post named FOR EXPORT ONLY is indeed a true account of the outside influences that tried to dictate the future of the Romanian children from the pre 1989 era.

The fact that these children in the main were returned home to their families, rather than exported abroad, is a credit to Romanian authorities and people like Ms Post who worked so hard to make certain that the rights of the child were put first, over and above all other interests.

I can confirm the book is the truth as I myself have lived in Romania since 1994 and have myself opposed the large international adoption lobby, which does not put the child's rights first, because its only real interest is in business. In this business it tried to make huge sums of money from Inter Country adoptions and children’s rights were not thought of.

Well done Roelie, a true and accurate account of the Romanian childcare reforms.