If anyone has ever forwarded homophobic rationalizations for disallowing same-sex couples to adopt, chances are they're based on the work of George Rekers. Same for reparative therapy, a.k.a. holding therapy for the queers.

And if George Rekers' dubious, agenda-driven scholarship on gay parenting was right, PPL would be packed to the gills with case archives of the few (by comparison) out gay parents permitted to adopt, despite being easy targets for discrimination and violence-fueled homophobia in this area.

Alas, that is not the case. And as it turns out, the evidence is stacking up pretty heavily that George Rekers himself is a closet-case.

An officer of the holding therapy outfit National Association for Research & Therapy of Homosexuality (NARTH), and, with James Dobson, a founding member of the Family Research Council, George Rekers is one of these well-paid professional bigots who makes a living haranguing gays both in the public sphere and in the legal one. Until 2008, Florida was the only state in the US that bans gay adoptions, outright, of course using the now-standard "risky lifestyle" and what-about-the-children arguments. They had the expert testimony of George Rekers in Lofton vs Sec. of Florida DCF(1977) to thank.

A recent (Feb 2010) publication has him again making the specious pronouncement that children adopted by gays are gonna run out and commit suicide.

Sadly for George, he was caught in this salacious Miami New Times article taking junkets with a young male prostitute who advertises his services on hardcore gay site, rentboy.com. As noted at cbsnews.com, Rekers has "disputed but not denied" the story and asserts rentboy.com was not where the two met (though he doesn't say where.) On his blog, "professorgeorge" claims he shared this web page on how to have a personal relationship with God with the young man. Wonder what other information on personal relationships was shared on the trip.

For their part, the Family Research Council has wasted no time in distancing themselves from Rekers, who promotes himself as an expert on teen sexuality. I'll bet he is. Dobson, people may recall or may not know, is the class act who instructs Christian fathers to take showers with their young sons so the boy can see the man's large member.* Getting wet and naked with your child of the same sex, we are told, will --- wait for it --- stop the young man from becoming one of the queers. No wonder they despise NAMBLA; FRC must think they're the competition, apparently.

There oughtta be a law banning gay kids from being adopted by Christian fundamentalist homo-bashers; instead the latter are the aggressors, who cry big tears of victimization when they are not allowed to use the law to oppress. As can be expected, Rekers also promotes himself as the model parent. Would it surprise anyone to know that Rekers is also a foster- and adoptive parent, himself? He's said to have adopted a young man, 16, four years ago.

I certainly hope for that young man's sake that he is not gay.

*While the original article at the FoTF site was scrubbed years ago, it was always available at archive.org. In researching this article, I was unable to find it there. So a link to freerepublic, a conservative site that republished the article, will have to suffice.

This comic is so apropos I almost didn't laugh at it

So true it ain't even funny. 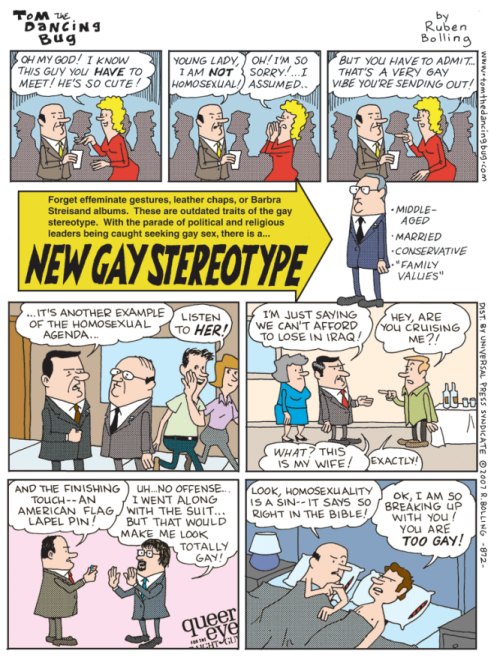 Those yelling the loudest about sin and whatnot are usually the worst offenders; it's why my screen name is taken from the 1931 film They Call It Sin, which is about an adoptee who gets some serious bastard treatment by her fine church-going aparents

These are the same types of people who have infested the adoption racket...hetero or homo is secondary, it's the hypocrisy and cover-up downlow lifestyle that makes them malignant people.

I don't know how many take the time to read about reparative/conversion therapy and compare it to attachment therapy, but it's been noted by some others, no matter what you call it - "holding", "re-birthing" - some of the practices used to right certain conditions are simply down-right abusive.    It's my belief some fundamentally messed-up things can happen when you take an adult with a desire for a traditional family + feelings of shame + feelings of rejection and couple that adult with a child who shows no real interest bonding/attaching to a specific type/gender, for whatever reason(s) a confused/angry child may have for not wanting to bond/attach.  How anyone can think force-bonding/attaching works is beyond me.... but alas, more and more people in Adoptionland are trying a variety of sketchy therapies on children and claiming all sorts of success.

I think it's good to note what happens to those force-fed a steady diet of criticism, bible-thumping, and peer/parental rejection.  [Pay attention to the twisted irony that takes place when one feels forced to act/behave a certain way... and then later, calls him/herself "cured", "fixed", or "repaired".]

clients who request it [reparative therapy] do so out of social pressure and internalized homophobia, pointing to evidence that rates of depression, anxiety, alcohol and drug abuse and suicidal feelings are roughly doubled in those who undergo reparative therapy.[42]  [From:  Reference for Reparative therapy ]

When they tell you they're in it for the children...

...question their motives (and question what they mean by that.)

This just in...Rekers resigns as head of the b.s. holding therapy organization he founded.

This adds new depth to just how perverted holding therapy is. Adults forcing children into submissive, prone positions and not letting up, in the name of  "loving" them, wtf.

Where did any of them get the idea forced intimacy imposed by adults onto a child or as it happens with gays a young adult is a good idea, except their own craven they're-dumb-bastards-and-so-they'll-take-whatever-I-give-them-and-like-it mentality.

Well, score one for the bastards, today.

Health, as promoted by some of the sickest people in need of antipsychotic meds and restraints, in the world.

Like RAD therapy, which is directly related, reparative therapy is just another way for parents to harass their queer kids, a lot like RAD is just another institutionalized way to harass adopted persons and foster persons.

And don't be an adoptee whose parents are gung-ho for ex-gay camp. They're certain they already have us all figured out before we even open our mouths to say anything.

These organizations are the last refuges of control freaks who know deep down they have NO control, yet run to people who will reassure them they do, and encourage them to take it out on those with less physical, social, and political power than themselves.