Hundreds of parents in Nepal are struggling to come to terms with the fact that their children have been adopted by Western couples without their consent.

Adoptive parents pay thousands of dollars in fees and "donations" to orphanages and government officials who process their cases, creating what many observers describe as an incentive for widespread abuse.

Fraud in international adoption became so rife that several Western governments suspended adoption from Nepal in 2010.

"Many of the documents turned out to be false," explained one diplomat. "When we tried to investigate we were either blocked by the Nepalese government or we were unable to confirm anything we had been told."

Sarita Bhujel was a struggling single mother when a neighbour persuaded her to put her seven-year-old daughter in a Kathmandu children's home.

During an interview she wept and buried her face in a rag while she described what happened.

"The neighbour said that I should keep my child in the organisation since her future would be secured," Ms Bhujel recalled.

"She said that she would be educated and would do well. I loved my daughter. I have two sons but only one daughter. I loved her more than anything."

Researchers say that there are about 20, mostly female, agents operating in Kathmandu, obtaining children for orphanages by offering similar promises to those Ms Bhujel received.

However, the majority of so-called "orphans" come from remote Himalayan districts such as Humla in north-west Nepal, where agents persuade illiterate parents that their children will receive a proper education in the capital.

Only later do they discover that their son or daughter has been adopted.

In Ms Bhujel's case she was promised that she could meet her daughter in the orphanage, although she says she was discouraged from visiting often.

She would take sweets and biscuits when she went. For about a year everything seemed to be fine.

"One day my daughter said, 'Mummy, there is someone from a foreign country who is going to take me away.' I told her that nobody was going to take her and that I would not allow such a thing. I told her not to worry," Ms Bhujel said.

She claims that she asked the orphanage staff and received assurances that her daughter would not be adopted. "I believed them. I am uneducated and I had faith in them," she said.

After that Ms Bhujel was prevented from seeing her daughter on various pretexts - that she was studying for exams or had gone for a picnic. 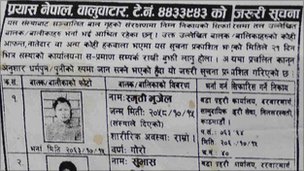 She said she broke down in tears at the orphanage and was insulted when she persisted with her inquiries.

Ms Bhujel works as a labourer on building sites and had only 50 rupees (40p) to her name at the time.

She used 30 rupees to bribe a member of staff at the orphanage. In that way, she says, she discovered that her daughter had been adopted by an Italian couple and gone to Italy.

The orphanage in question denies Ms Bhujel's account. Its director said that she would not have sent the girl to Italy if she had known at the time that she had a natural mother.

"I always remember the meeting with her when I explained about her daughter being adopted by [an] Italian family. She was so happy and told me that we have saved her daughter's life," the director said.

Ms Bhujel recalls being distraught and relying on the support of neighbours for months after learning what had happened.

"For six months, I could not do much… no sleep, no food," she said.

In 2007 media revelations about corruption in international adoption led the Nepali government to suspend the process.

But following pressure from European countries, where childless parents are desperate to adopt, the process began again in 2008 without substantial reforms. Ms Bhujel's daughter was adopted that year.

Foreign couples are required to pay $5,000 (£3,216) to the orphanage and $3,000 (£1,930) to government officials for handling the paperwork. In many cases adoptive parents are believed to make other payments as well.

The text states that the child has been found abandoned. If no one comes forward to identify them, the police issue documents declaring the child is an "orphan".

Among the papers and photographs from her daughter's case Ms Bhujel has a copy of the advertisement placed by the orphanage, picturing her daughter and claiming that she had been found abandoned.

She also has a copy of the police letter certifying her as an orphan, although the police have subsequently said that the serial number on the document indicates an irregularity.

Ms Bhujel, who is illiterate, says the orphanage eventually asked her to put her thumb-print on a document in exchange for photographs of her daughter, which her new family were sending from Italy.

The undated document - which she can not read - states that she agreed to put her daughter up for adoption.

Nepal is a signatory to the Hague Adoption Convention which sets standards for international adoption but has not implemented it.

The officials in charge of reform are widely seen as linked to the old practices and there have been allegations in the local media of corruption in the committee charged with bringing the system in line.

Nevertheless, children's rights activists and diplomats - interviewed on condition of anonymity because of the sensitivity of the subject - say that while the Nepali government drags its feet on reform there is pressure on some Western governments to reopen the process.