Help Nagarani and other parents of missing children

Help Nagarani and other parents of missing children

Today the Sunday Times reported on the work of ACT (Against Child Trafficking), being to assist parents of missing children. Children missing because they were adopted by foreigners, in exchange for money.

Some of these children were kidnapped directly from their parents. Nagarani's son, for example, was kidnapped during the night - just as Madeleine McCann.

ACT is in need of urgent funding. To bring Nagarani and her husband to The Netherlands. But also to assist many more parents in similar situations.

I hope we can show that the world cares about all children and all parents! 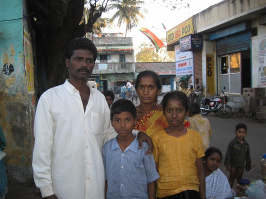 In 1999, the 18 month old son of Nagarani and her husband Kathirvel was kidnapped in India and sold by to the orphanage Malaysian Social Services.

In 2007, through the work of ACT, Nagarani’s child was located in the Netherlands. The Dutch adoptive family refuses any contact, or DNA testing. The adoption agency and the Dutch Ministry of Justice take no responsibility.

ACT helped Nagarani and Kathirvel to get a lawyer in the Netherlands, so that they could request visiting rights in the Dutch Court of Justice.
See also: A Chennai slum dweller's fight for her Dutch son

ACT URGENTLY NEEDS FUNDING TO BRING THESE INDIAN PARENTS TO THE NETHERLANDS, SO THAT THEY CAN BE PRESENT IN THE COURT on 15 June 2010.

I hope your fundraising efforts are very successful, Roelie.  What saddens me is that it wouldn't be necessary to raise funds to support birth families to travel overseas and seek contact through overseas courts - if the adoptive parents could just see that their child's best interests would be served by building a sustainable relationship between themselves and the child's original family.

Instead, too often the adoptive family go to ground, the traffickers go unpunished and the wronged birth family is left with nothing.

Thanks for your kind words, Julia.
And THANK YOU for your generous donation. It means a lot to us, not only the money, but also to know that there are people who are ready to support Nagarani and Kathirvel.

I am personally very touched now, to see donations coming in. It gives hope for the future.

We don't have the full amount yet, but it sure looks like we can make it happen!

Dear Julia & all others who donated:

THANK YOU FOR CARING,