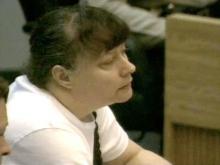 Smithfield, N.C. — A Johnston County woman accused of killing her 4-year-old adopted son took the stand Monday in her defense, saying she turned to the teachings of a Tennessee evangelical minister to discipline her children.

Lynn Paddock, 47, is charged with murder in the Feb. 26, 2006, death of Sean Paddock. Authorities said Sean was bound so tightly in blankets that he suffocated.

Defense attorneys have argued that Sean's death was accidental and that Paddock's actions were a form of discipline, not abuse.

Paddock told jurors that she became interested in adoption after Dave Thomas, the founder of the Wendy's fast-food chain, encouraged people to adopt older children.

She and her then-husband, Johnny Paddock, adopted six children between the mid-1990s and 2005, when Sean and his biological brother and sister were placed with the family.

Lynn Paddock testified that some of her adopted children came to the couple with emotional issues and that other families didn't want them.

"We decided that, no matter what, we'd take what God brought us. Whatever they needed, we would give it to them," she said.

Deborah Artis, a regional director with the Children's Home Society who worked with Johnny and Lynn Paddock to adopt the children, testified Monday as the first defense witness that four of the adopted children had some emotional problems prior to being adopted.

Lynn Paddock said she and her husband decided to use discipline techniques espoused by the Rev. Michael Pearl, an evangelical minister who publishes books and articles on rearing submissive children. She said swatting children with flexible plastic rods was preferred to spanking because it was less demeaning.

Johnny Paddock got too angry once when disciplining one of the children, she said, so she assumed the role of disciplinarian in the Paddock home. Her ex-husband helped her purchase the flexible rods, she said.

Prosecutors spent two weeks presenting testimony from the surviving Paddock children about almost daily abuse inflicted by Lynn Paddock and from expert witnesses who called the beatings and restrictions placed on the children as "ritualistic abuse."

Artis said she never physically inspected six children placed with a Johnston County couple because the children seemed to be adjusting well to their new surroundings. The adoption agency performs criminal background checks on prospective adoptive parents and offers them parenting classes, she said.

She wept on the witness stand when she looked at pictures of Sean's body, saying she learned of allegations that Lynn Paddock hit the children with rods and other devices through news coverage of the case.

The adoption agency has a "no hitting" policy that the Paddocks signed, she said.

Jurors also learned that the Paddocks received $2,200 a month in state subsidies for adopting the children.

Copyright 2008 by WRAL.com. All rights reserved. This material may not be published, broadcast, rewritten or redistributed.
0