one more for the pot 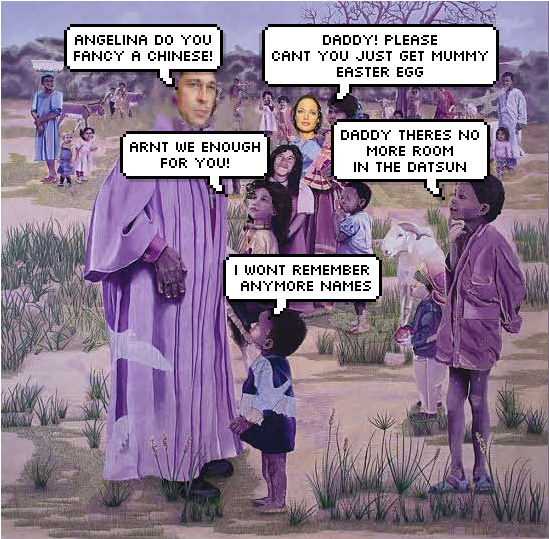 According to reports, Angelina's brother, James Haven, believes his sister and live-in-partner will continue to adopt as long as they are able to:

Angelina Jolie’s brother, James Haven, has revealed the actress’s plans to have another child with her partner Brad Pitt. Haven said the couple have decided to go with adoption this time around and are planning on a little African girl.

According to reports, Jolie and Pitt plan to begin looking for African orphanages over the Easter holidays.

“They are creating one big family and will keep adopting as long as they are able to,” says Haven. “Angie and Brad talk about how much they have been taught by their kids. In many respects Angie saved Zahara’s life and there are so many more children whose lives she could save and she talks about that constantly.”

Of course, in some places around the world, it's not socially acceptable to have/raise children out of wed-lock, but I suppose American celebrity can buy a pass to do just about anything.

As long as no one stops the very popular and wealthy couple, who's going to say they can no longer adopt?

She dishes to Barbara Walters about Billy Bob, her dad, her son, and her bisexuality

Angelina Jolie says that she wasn't kidding when she flaunted her torrid marriage to Billy Bob Thornton -- the his-and-hers tattoos and vials of blood, the boasting about their sex life -- even though she says they're no longer friends. In an interview with Barbara Walters, which ABC will air on ''20/20'' on Friday, Jolie says of her ex-husband, ''I thought he was amazing. And now I just feel like I don't know him.'' Their two-year marriage soured in 2002, shortly after they adopted a Cambodian orphan, Maddox. ''It's like we just changed,'' she says. ''We became very different people, and I wouldn't know what to talk to him about.''

Jolie, whose ''Lara Croft Tomb Raider: The Cradle of Life'' opens July 25, says she's similarly estranged from her dad, Jon Voight, despite their brief reunion playing father and daughter while shooting the first ''Tomb Raider'' in 2000. ''It was a hello and goodbye. And that was kind of that time for us,'' she tells Walters.

Jolie says she's so devoted to Maddox that she plans to raise him in Cambodia so that he'll know his heritage. ''I think I'll never get married again,'' she says. ''I don't want to have a temporary father for my son.'' She adds, ''I don't really know if I'm meant for marriage.''

Still, she says, ''I consider myself a very sexual person,'' says Jolie. "If I fell in love with a woman tomorrow …it's right to want to kiss her and touch her.'' In fact, she said, she had a bisexual relationship when she was a teen, one that involved ritual self-mutilation. ''I got knives out and had a night where we attacked each other... it felt so primitive and it felt so honest... and then I had to deal with, you know, not telling my mother, hiding things, wearing gauze bandages to high school.'' She says, however, that she's left those days behind. ''I think when you make a decision to have a child, you cannot think about suicide again and you can't be self-destructive.''

Posted Jul 09, 2003
Later, when she was pregnant in 2006, another interview reads,
Angelina Jolie is expecting a baby this summer with Brad Pitt, PEOPLE has confirmed. "Yes, I'm pregnant," Jolie told a charity aid worker in Santo Domingo, Dominican Republic, Monday. The pregnancy has since been confirmed by representatives of both stars.

This is the first biological child for Jolie, 30, who is already the mother of son Maddox, 4, whom she adopted from Cambodia, and daughter Zahara, 1, adopted from Ethiopia in July.

Jolie, who has often spoken about expanding her family, added that she’d like to adopt again. In October she told PEOPLE: "There's something about making a choice, waking up and traveling somewhere and finding your family."

[You mean hunting down people you want for yourself, and making it all seem like a perfect fit?  I think that's how she caught Brad, too!  Women on the hunt for something really scare me.]

I swear this is the last

I swear this is the last time I dwell on this topic, because it's just so stupid of me to care what billions of dollars can buy these days, especially when it's tabloid/star related, BUT, the Angelina story about carrying twins is just too much over-kill.   Is she now hitting fertility clinics, or what?

Anyway, I found a real good comment about Brad and company, and how they are constantly uprooting things for themselves.

"Wait, these hot bitches are moving to France now?  Didn't they just move to New Orleans last year, after moving in together in Malibu 6 months before that?  People running from the cops don't move around this much.  God damn by the time these kids are 10 they're gonna live in 10 different countries, under the sea, and in the woods with wolves, where instead of names they'll be known by a distinctive yet bone-chilling howl in the moonlight."